Some catching up is called for in my survey of the indexes of these books. Some interesting points arise about use of capital letters and the sorting of subheadings.

Number 18 is The Feminine Mystique by Betty Friedan. The current version available via Amazon has a tidy index, including names and subjects. Worthy of note are the subheadings, which depart from the usual alphabetical order, and are organised as they appear in the book.

Number 19 is The Making of the English Working Class by E. P. Thompson. This is a large book and the current version has a relatively short index, about 12 pages for a book over 900 pages long, which makes me wonder what has been left out. Many headings have lots of locators, which can make an index difficult to use. Also, all the headings start with a capital letter, even if the subject in the book doesn’t. This can be tricky on the eye for modern readers more accustomed to lower case letters.

Number 20 is The Silent Spring by Rachel Carson. A more generous allowance for the index in this book, than the one above. Again, there are capital letters at the start of all the headings. The index doesn’t seem to suffer from excessive numbers of locators for each heading, but there are many run-on subheadings for some entries. As with The Feminine Mystique, the subheadings are in the order that they appear in the book, not in alphabetical order.

Number 21 is The Structure of Scientific Revolutions by Thomas S Kuhn. The 50th anniversary edition has an index that uses run-on subheadings that are in alphabetical order, and some of them suffer from excess locators, making it rather difficult to find things in this book.

Number 22 is A Grief Observed by C. S. Lewis, and the index, if there is one, isn’t available on Amazon.

Number 23 is The Elements of Style by Strunk and White, also without index visible.

Number 24 is The Affluent Society by John Kenneth Galbraith, and we’re back with an index to look at in this volume. Another slightly shouty index with capitals at the start of all entries. Run-on subheadings which are generally short, and in alphabetical order.

Number 25 is The Uses of Literacy: Aspects of Working-Class Life by Richard Hoggart. The recent edition seems to have an updated index. It includes the names of people who probably weren’t born when this book was first published. It’s quite short for the size of the book. Capitals only for proper names, lower case for other entries. Very few (possibly unnecessary) subheadings, so some entries with lots of locators. Some cross-references that are unnecessary, and a double entry would have done – bird fancying has one locator, so canary-breeding see bird fancying could have duplicated the locator and not bothered with the cross-reference, and I might have checked if either or both should be hyphenated.

Earlier this year I was asked to make an index for a baking book written by a YouTuber (yes that is a word, it’s in the dictionary). So I did the job and ended up a bit puzzled. There were plenty of recipes for cakes, cookies and cheesecakes, but they were a bit ‘easy’, no complicated techniques, no hard-to-find ingredients, not many flavours, and I wondered faintly why anyone had bothered to make the book. So I put the work behind me and got on with other things and wasn’t even tempted to try making any of them.

Last Friday, 1st July, while Britain and Europe were still reeling from Brexit, I was labouring over an index for a book about medieval trade across the North Sea, and on the day the destruction of the Somme was remembered (wasn’t #wearehere fabulous? I wish I’d been able to see some of the young men myself), Tanya Bakes was launched. And I finally got why the book was written, it’s not a book for my demographic at all, it’s a cookery book for people who want straightforward, simple, feelgood recipes, with nice pictures. It’s for girls (and boys) who want to thank their mum or dad or sister, or nan or uncle or teacher and make them a few cookies. It’s for friends who want to spend an hour together to make something before settling down to watch a movie. It’s for anyone who wants to make cheesecake or party pudding or a cake you can stick sparklers in. There’s not much in the way of fancy icing to be done and it shows it is OK to put sweets on cakes if that’s what you want to do. If you want recipes for Nutella or put peanut butter in something, you’ll find something to help you.

Twitter went mad. #TanyaBakes was used by people expressing their excitement at having received their copy, saying they were going to one of the book signings she has arranged, and more importantly perhaps, showing off their bakes. So it’s not my demographic, but I’ve got to congratulate Tanya if she encourages people to try a few things for themselves. It’s not a book to grab and use every day, I had to laugh a little at the person who put a review on Amazon complaining about the amount of sugar, but in moderation it has got good points.

And I made some brownies. Tanya’s most ‘exotic’ recipe uses coconut sugar and coconut oil, I swapped that out for brown and white sugar and some butter, but I did put in the half an avocado. Here’s a piece with some raspberries out of my garden and a bit of cream. 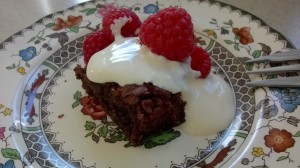